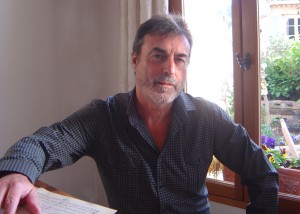 “Bin there, done that, got the t-shirt” might make a neat if rather glib take on Errol’s life in music. Or, more unkindly perhaps, the epithet “Jack of all trades” would fit…no need to go on. Truth to tell, at the sprightly age of nearly seventy he’s just as happy directing Handel’s Messiah from the continuo as conducting the Wiener Concert-Verein within the hallowed precincts of Vienna’s Musikverein, or indeed singing as member of the Hilliard Ensemble on a tour to celebrate its 40th birthday, or composing a concerto in response to a commission for performance at les Invalides in Paris. 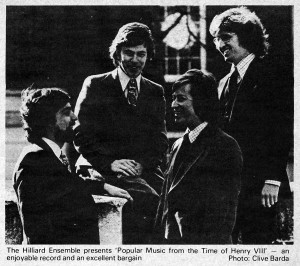 In his earlier years you might have caught him teaching harmony and counterpoint at London’s Trinity College of Music, singing in the choir and sometimes playing the organ at St. Paul’s Cathedral, performing onstage with the Pink Floyd, or assisting the legendary Wagnerian conductor Reginald Goodall on the ENO’s Ring cycle production during the 1970’s.

No standard trajectory this – and yet the sheer variety has undoubtedly brought its artistic rewards. It’s also probably accurate to say that the pure enjoyment of making music in so many different ways has fairly kiboshed any ambition Errol may or may not have had for a conventionally signposted career….

Voilà! The last twenty-six years of his life have been spent in France on the Côte d’Azur, hanging out in a little village near Nice and (intermittently) working around the place. Freelance engagements have taken him elsewhere to fulfil contracts as opera conductor or chorusmaster in theatres at Aix-en-Provence, Baden Baden, Cologne, Chicago, Montevideo, Monte Carlo. As symphony conductor he has appeared in Leipzig, Vienna, Bregenz, and at the Yehudi Menuhin festival in Gstaad.

To cut a long story short, the notion of Ristretto was conceived by Errol in early 2012 and born, blinking in the golden Mediterranean sunlight, during the autumn. 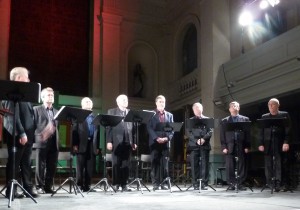 What goes around, comes around, and currently Errol is indulging a touch of nostalgia by revisiting facets of his earlier career (see Hilliard, left). A recent stint as chorusmaster at the Wexford Opera festival brought his chorus an international Opera Awards nomination under the “world’s best opera chorus” category. The fact that the distinction finally went to Bayreuth brought Errol to heel, and appropriately served to remind him of his abiding love of Wagner which combusted spontaneously on hearing, not the first cuckoo in spring, but Kirsten Flagstad sing the Liebestod, at the age (Errol’s) of sixteen.

That unsurpassed 1952 recording of Furtwängler’s Tristan got him into the opera pickle in the first place. No getting out now. Roll on the Ristretto Ring cycle?